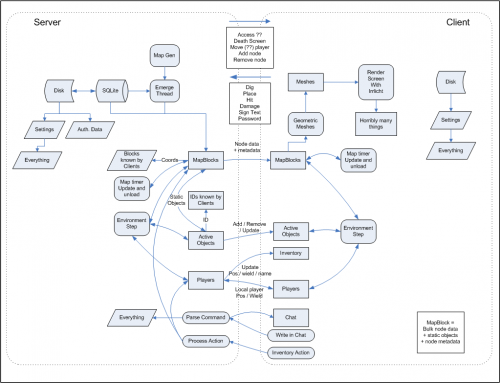 Each of these "components" consists of some C++ code and a Lua API for scripting.

Both the server and the client have an Environment. An environment contains the map, any nodes, players, objects, and various other things. The environment is "stepped" by an interval called a dtime, updating the world and running Lua callbacks.

The map is a container of MapBlocks. A MapBlock contains 16x16x16 nodes, any static objects, and meta data.

The Server class is the main class for the server. It hosts the update loop, and owns the lifecycle of all other server components. Whilst there will always need to be a main class to host the update loop, this class may be considered a god class as it contains a lot of other responsibility.

In singleplayer or local server mode, the server class is started on a thread

The ClientLauncher is used to initialise the window, contains the main menu loop, and is used to determine how the client should be launched.

The Game class is the main class for the client. It hosts the clear-draw-display-update loop, and owns the lifecycle of all other client components.

An interface for fetching pointers to the managers of things. It is passed to almost everything.

It is implemented by Client and Server. Neither implements all interfaces.

Generally these can be accessed by referring to IGameDef:

This is the main difference between 0.3 and 0.4. In 0.3 this does not exist, because all content is defined in static tables in source code.

Stores the definitions of items, by item name. Content is set up at server startup, and transferred from server to client at beginning of connection.

Stores the definitions of nodes and the mapping between node ids and names. Content is set up at server startup, and transferred from server to client at beginning of connection.

Stores and plays sounds on the client.

A minimal event manager currently only used for triggering sounds on the client.

Contains a lot of stuff. Most considerable members are listed here.

Contains a lot of stuff. Most considerable members are listed here.

The script engine contains "core to script"- as well as "script to core"-interface implementation.

Contains most of the actual game environment (players, objects, map...)