Minetest has two types of trees built in: Small simple ones like the trees in the vanilla Minetest game, and more complex ones generated using a L-system and a tree definition. L-system trees can be spawned with minetest.spawn_tree and are defined by a treedef table.

The L-system is much like turtle graphics: there is a cursor, it is called the turtle. It can be moved and rotated, and place none, one or more nodes in each step, depending on the used command:

The turtle always starts facing up.

If the axiom is TTTT the result is four vertically stacked nodes of trunk material. The turtle starts at its spawn position, and does the step T four times. T means “move forward one unit with the pen down drawing trunks only”. Because the turtle is initially facing up, the resulting structure is vertical.

With the axiom TTTTT&TTTTT&TTTTT&TTTTT and the angle set to 90 degrees the result is a square of trunk material. After this program the turtle will be back on its spawn position, lying on its side, facing left.

With these commands it is possible to save and recover both position and direction of the turtle. The axiom TTTTT[^TTTTT][&TTTTT] with the angle set to 60 degrees makes a “Y” shape. As always the turtle starts at spawn position, facing up. It goes forwards (up!) 5 times, placing trunks. Then the position and rotation are saved. The part wrapped in [ and ] is done, and the turtle is back to the position we saved before. Now the 2nd branch is done, starting from the same pos as the first.

A L-system “program” consists of the axiom and replacement rules. In addition to above, turtle knows the symbols A, B, C and D, which can be used in L-systems. Everytime one of those symbols is found in the axiom, it will be replaced with the whole corresponding rule. This will be done, until there are no more replacements to do or the maximum recursion depth is reached.

Let's say we want to create a fractal “Y” shape: It looks like a “Y” but both ends of it are themselves shaped like “Y”s. With 3 recursions this should give us a total of 8 (23) ends.

Here is the axiom:

Now rule A needs to create the branch. If rule A itself uses an A at its end, that will be replaced again, and so on … Rule A is this:

Let's look at it step by step: First we do the axiom, just a vertical trunk. Then on its top is added one V shape (rule A). All in all the tree now looks like this: TTTTT[^TTTTTA][&TTTTTA] (the first A has been replaced by the whole of rule A). In the next step both A's at the end of the branches are replaced, again with the whole of rule A, giving this:

And after the 3rd recursion this is the result: 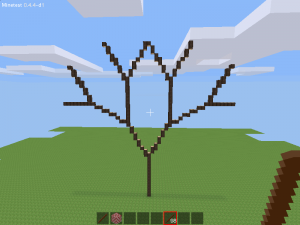 The symbols a, b, c, d work like the symbols A, B, C, and D, respectively, but they will only be replaced by chance.