Everything is built on a small core, that was the original network multiplayer release of Minetest (let's call it NMPR; the 2010-10-24 version). Being around 10000 lines of code, it contains:

As the current code still largely bases on the NMPR, it is useful to look at how it works.

NMPR has been made available at https://github.com/celeron55/minetest_nmpr (easiest to build). Older source release is here (source) (build like this). Also the original win32 release is available (works in wine). 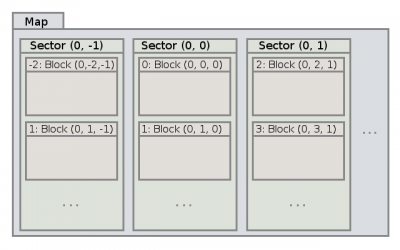 These form a relatively performant storage of voxel data. In addition to these containers, the latest fetched MapBlock is cached in each MapSector, and the last fetched MapSector is cached in Map, resulting in very useful sequential access speed through the whole abstraction layer.

In later versions of Minetest, the environment also contains things like ActiveObjects and ABMs.

Minetest uses it's own reliability layer on top of UDP. It isn't well documented at the moment, and thorough understanding of it isn't that important, so let's skip it as of now.

The NMPR server logic is 287 lines of code that runs in two threads:

The packet handler handles the TOSERVER_* commands coming from clients.

Most of what the client does is very obvious, but there is one thing to note:

Rendering of players and GUI is done by regular Irrlicht stuff (Irrlicht tutorials). What is interesting is how the voxel world is rendered.

In NMPR, rendering of the Map works like this:

Cache step (runs in the background, in a thread managed by Map)

This is how Minetest works up to this day, except: